Chinks are starting to appear in Apple, as quarterly earnings were generally unimpressive. When Apple reports a quarter like this, the stark contrast between the visionary Steve Jobs and game–manager Tim Cook becomes readily apparent. 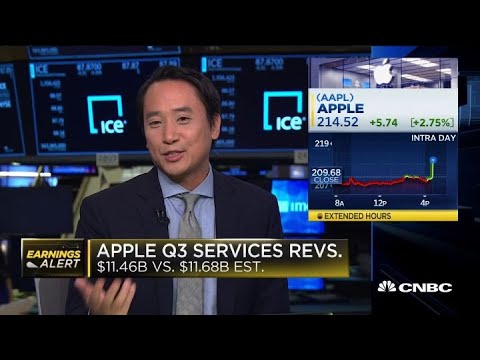 Product revenues for the quarter were $42.35 billion, which is an incredible number on an absolute basis. However, on a relative basis, it was a $750 million decline from the same quarter last year, about 2 percent.

This was slightly offset by a 13 percent increase in services revenue to $11.45 billion. Total sales thus only increased by $544 million, or about 1 percent.

So by the time we hit the bottom line, Apple made $10 billion in the quarter, which is an amazing number on an absolute basis. Yet net income in the same quarter last year was $11.5 billion.

In terms of geography, Europe and China saw modest revenue declines while the other territories saw small increases.

In terms of category, iPhone sales fell significantly – by 11 percent to $26 billion. Computer sales offset some of these declines, adding 11 percent to $5.8 billion.

What this means is that Apple is, to a certain extent, running on hype.

Apple remains a cash machine. It has $210 billion of cash on hand, offset by $85 billion in debt. Nearly $50 billion in cash was generated from operating activities, and even though that is a decline from last year’s $58 billion, it’s still an incredible cash haul.

The market apparently thinks these declines are temporary in nature, as the stock is up more than 4 percent in after-hours trading.

This is where the rubber hits the road for Apple, in terms of who is running the company. Tim Cook has done a very solid job of managing the company, but his lack of vision is evidence with regard to the company’s overall lack of innovation.

What Does the Future Hold?

The next big maneuver for the company will be rolling out its Apple TV+ streaming service later this year.

This will include original content coming out of Apple studios, adding more competition to the field that includes Netflix, Amazon, Hulu, and all the other major studios that are launching their own streaming services, including Disney.

One element of Tim Cook’s direction that has been positive, albeit slow, is decreasing reliance on iPhone revenues. At one point, iPhone revenues constituted 70 percent of company sales. That number is now down to 50 percent. It needs to go lower, and Apple needs to innovate new products in a more expedient fashion.

This is true despite Donald Trump’s call, and the DOJ’s positive response, that Big Tech should be investigated for antitrust violations.