Scoring her second deal with the Obama-allied streaming service Netflix, AOC has announced that she’s in talks to produce another documentary with the film company’s original content division. This time around, the project will focus on her now-defunct Green New Deal, which failed miserably last March in the U.S. Senate after it garnered zero votes.

AOC’s Green New Deal – a list of pie-in-the-sky policies designed to fight climate change – has been widely criticized for being too broad and expensive. Among the proposals listed in the plan would be the introduction of hydrogen-fueled planes, which Ocasio-Cortez claims could lessen America’s carbon footprint, and the culling of “farting cows,” which increase the air’s methane supply.

.@AOC on millennials and social media: "We’re, like, the world is going to end in 12 years if we don’t address climate change" pic.twitter.com/HjhbVyfFN4

However, it turns out that vanquishing cow farts is incredibly expensive. The Green New Deal would cost American taxpayers anywhere between $51 trillion and $92 trillion.

The Green New Deal wasn’t even be taken seriously by uber-liberal Democrats like Dianne Feinstein of California. Despite the consistent opposition it’s faced and its respective Senate dismissal, AOC continues to push the Green New Deal as if nothing ever happened.

“The new documentary is worth a watch, no matter your political persuasion.”

I’m so glad #KnockDownTheHouse is inspiring people across the political spectrum.

At early screenings, even Trump supporters left the film in tears – because it’s about the power of everyday people. https://t.co/BijnoLIsOv

Given her consistent attempts to promote something that has already been struck down in grand fashion, one wonders if AOC isn’t as concerned with changing America’s political spectrum as she is with increasing her screen time. Much like the Obamas, AOC is paving her way through the film industry while failing to produce any significant legislation that addresses problems that everyday Americans actually face.

The new Netflix documentary will monitor the birth and life of the Green New Deal. Given how short its life truly was, is there even enough material there for a full documentary feature? Is this a true attempt to tackle the country’s environmental problems, or is it just another chance for AOC to get on camera?

AOC: An Instagram Celebrity With a Congressional Side Hustle

The film will be directed by Rachel Lears, who supervised AOC’s first documentary with the streaming service. That one, titled “Knock Down the House,” detailed AOC’s early campaign days and her historic victory over Democratic Representative Joe Crowley to gain access to New York’s solidly-Democratic House seat.

In addition to her burgeoning Netflix career, Ocasio-Cortez regularly hosts live Instagram feeds for her followers. Though these videos do feature her answering questions regarding current affairs, they’ve also featured the congresswoman discussing popcorn, instructing people on how to set up Instagram feeds themselves, and showing off her D.C. apartment. 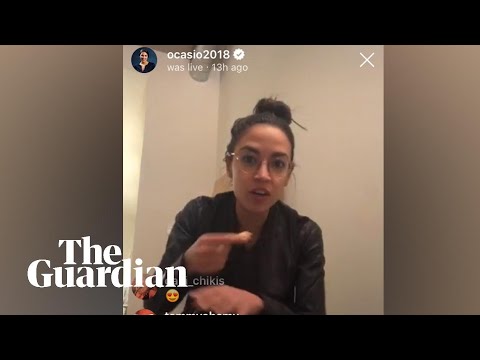 In March 2019, YouTuber “Mr. Reagan” referred to Alexandria Ocasio-Cortez as an “actress” playing the role of a congresswoman to further the Democrats’ power.

As time goes by, that’s exactly what AOC looks like: an Instagram celebrity who views her job in Congress as little more than a side hustle.

Disclaimer: The views expressed in the article are solely those of the author and do not represent those of, nor should they be attributed to, hCCN.com.