Andrew Yang says more Americans didn’t support impeachment because they actually have real problems to worry about. That was his analysis after Thursday’s debate, when CNN pressed him about why Democrats couldn’t get more Americans on board.

Yang said Americans are losing trust in the media and Democrats for acting like Donald Trump is the cause of all our problems:

The more we act like Donald Trump is the cause of all our problems, the more Americans lose trust that we can actually see what’s going on in our communities and solve those problems. 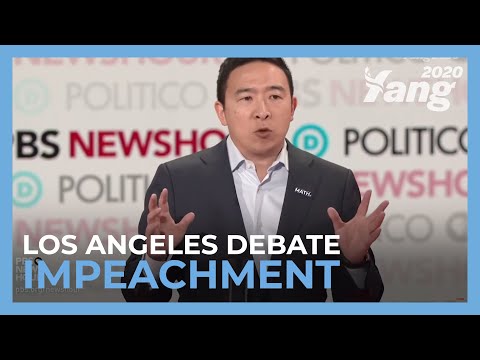 It was a constitutional necessity for the House to act as it did.

And Elizabeth Warren, who called impeachment “a constitutional moment.”

Yang also noted the futility of an impeachment process that won’t produce anything of material consequence because the Republicans control the Senate:

We have to stop being obsessed over impeachment, which unfortunately strikes many Americans like a ball game where you know what the score is going to be.

Then Yang went back to the trust issue:

In Yang’s view, that reason is Donald Trump actually addressed the plight of working Americans. He says they’re worried about real problems that affect their lives.

They’re worried about job security, their health, and having enough to pay their bills and make ends meet. They don’t have time or energy for political drama.

Proof @AndrewYang is changing hearts and minds, even with lower speaking times. A woman from a live focus group by LA Times talks about why she switched from Biden to Yang.

Yang told CNN’s audience that he’s disappointed with the other Democratic candidates. He thinks the focus should be on solving problems instead of hating Donald Trump:

I seem to have the lone difference of opinion up there… Everyone else was impeachment, impeachment… Americans are saying, ‘I don’t care as much as I’m choosing between drugs or heating oil.’ Those are the issues voters are focused on.

That remark is a powerful illustration of where Andrew Yang’s heart is.

All the noise about Trump is a fake TV problem to someone choosing between enough medicine and a warm house to sleep in. Yang essentially revealed the privilege, narcissism, and decadence of the Trump impeachment drama.

Spilling the tea over Donald Trump is a way for out of touch elites to flaunt their privilege. They’re showing off the luxury of having no problems worse than being annoyed that Trump is president.