By CCN.com: Tesla finally broke its losing streak. The stock surged eight percent on Tuesday. Even with the huge bounce, Tesla stock is still under fire. Shares remain under $200 and near their lowest levels since 2014. That would have been inconceivable last year, when Tesla was supposed to be bought out at $420 per share. And, one analyst says things are about to get a whole lot worse.

William Smith, of Blaine Capital, went on CNBC with a doomsday message for Tesla stock owners.

There can be a thin line between being a visionary and being a charlatan. Certainly, some of Musk’s recent behavior has raised legitimate questions about his business acumen. Though other criticisms, such as of his compensation, seem less justified. Regardless, the stock market has cast its judgment, dropping the value of Tesla below that of Space-X.

That wasn’t the end of Smith’s Tesla criticisms either. He next aimed his fire at the Model 3:

If you look at the product that Tesla is actually making now, this Model 3, it is absolute garbage. This is not the ‘S’ and it’s not the ‘X’, that’s the old Tesla, this new Tesla is being thrown together by hand, in a tent. You can’t go through a car wash, these things are blowing up all the time, the batteries are incinerating, it is not a quality product.

While Smith paints Model 3s in the worst possible light, even bulls must concede that the company has had some serious quality control headaches over the past year. Consumer Reports stopped recommending the vehicle earlier this year due to reliability issues.

Smith finished his scathing assessment of Tesla’s prospects with the following warning:

We think Tesla is a zero, that’s why it’s our favorite short.

He’s not the only one with dire predictions for Tesla stock either. Recently, Daniel Ives of Wedbush called Tesla a “code red” situation and predicted a massive drop in the stock price:

With a code red situation at Tesla, Musk & Co. are expanding into insurance, robotaxis, and other sci-fi projects/endeavors when the company instead should be laser focused on shoring up core demand for Model 3 and simplifying its business model and expense structure in our opinion with headwinds abound.

Not everyone agrees with these dour forecasts, however. Tesla stock soared on Tuesday as one technician said that things have gotten so bad that they have to get better now: 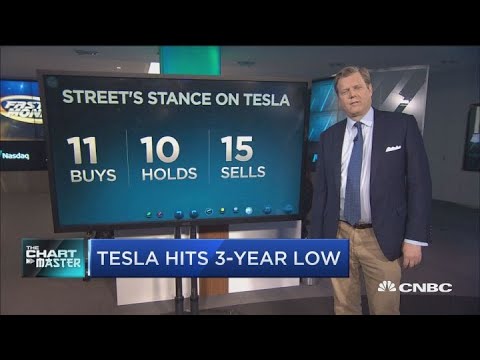 Meanwhile, another analyst predicted a 90 percent rally for Tesla stock based on the stock’s prior behavior.