Was Amaury Sechet serious when he claimed to be the person who created Bitcoin? | Source: CoinGeek/YouTube

The Bitcoin community will be rolling its eyes right about now. Bitcoin Cash developer Amaury Sechet, the self-described “benevolent dictator” of the Bitcoin ABC (primary) implementation of BCH, has claimed he is Satoshi Nakamoto.

In the event the tweet is later deleted, here’s a screenshot:

Sechet and Bitcoin ABC were cited by former Bitcoin Cash developer (now on Bitcoin SV) _unwriter as a primary problem for the BCH ecosystem. _unwriter believes that virtually anything that Bitcoin ABC wants, ABC gets, which he sees as toxic for decentralization. The power of Bitcoin ABC was a motivating factor in the BSV fork’s foundation. _unwriter recently launched a number of projects on Bitcoin SV.

If you don't believe me, stiff!

A Stack Exchange post by Bitcoin Core developer Gregory Maxwell explains that faking Satoshi’s identity is easier than one might expect.

“So, for example, a couple years ago Craig Wright claimed to ‘prove he was Satoshi’ by simply copying some pre-existing signatures out of the blockchain and posting somewhat obfuscated instructions on verifying them. It was figured out pretty quickly, but still managed to fool a lot of people– they were too caught up in the mumbojumbo to think of the obvious.”

Indeed, there’s a greater-than-zero possibility that Sechet is joking — perhaps even taking a not-so-subtle jab at Craig Wright. Let’s hope so anyway, goodness knows one Faketoshi is enough.

Jury Is Out on Amaury Sechet Being Bitcoin Creator Satoshi Nakamoto

However, we are journalists. We have to report on the fact that a prominent BCH developer is now appearing to claim the name Satoshi Nakamoto. Certain questions arise as to the nature of Sechet’s wealth. For one thing, if he’s Satoshi Nakamoto and he doesn’t believe in Bitcoin Core anymore, why not just cash in his billions and pump the Bitcoin Cash price?

For his part, the last person to publicly claim he was Satoshi Nakamoto was bitter about the idea:

While we’re on the subject of Craig S. Wright, there is growing (unverified by CCN.com) speculation that he may be an academic plagiarist:

The story is still developing, as Sechet has yet to post any more information. The last tweet he made related to the claim was a re-tweet of someone else claiming he was telling the truth:

Here’s a relatively recent interview with the developer: 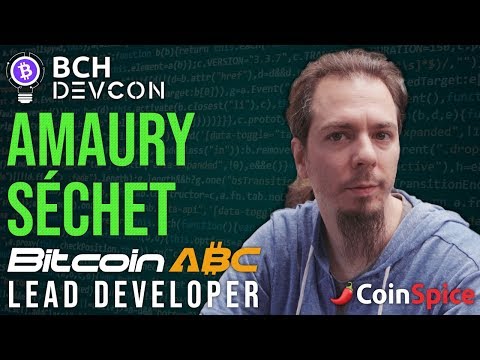 Rest assured, CCN.com will be hot on this story. We’ve reached out to Amaury Sechet for an interview, any interesting results of which we will post forthwith.