In response to a tweet lauding her for her stance on congressional protection for whistleblowers, Alexandria Ocasio-Cortez tweeted that “solitary confinement is torture” and specifically called on the United States to release Chelsea Manning.

Related: Chelsea Manning has been trapped in solitary confinement for refusing to answer questions before a Grand Jury.

Chelsea is being tortured for whistleblowing, she should be released on bail, and we should ban extended solitary in the US. https://t.co/95ef4xYt3k

Is AOC Right to Categorize Solitary Confinement as Torture?

Chelsea Manning’s detainment may come as a surprise to some readers. The long and short of it is that she opted not to testify to a Grand Jury in Virginia currently investigating Wikileaks. Manning is a unique witness in anything related to Wikileaks, as she was convicted in 2013 of leaking thousands of classified documents to the organization.

Manning’s 35-year sentence was commuted in 2017 by outgoing President Barrack Obama, and she later ran in the Democratic primary in Maryland. Formerly Private First Class Bradley Manning, she underwent sex reassignment surgery while still in military prison, in 2016.

Refusing to testify to a Grand Jury is similar to ignoring a subpoena: while you have the right to do it, there are consequences.

Virginia jail officials have denied that her 22-hour per day administrative segregation is “solitary confinement” and refute the characterization of her current situation.

Solitary confinement has repeatedly been ruled neither cruel nor unusual in high courts. In a 1970 case, the US Supreme court said:

“Confinement itself may amount to cruel and unusual punishment prohibited by the Constitution where confinement is characterized by conditions and practices so bad as to be shocking to the conscience of a reasonably civilized people.”

However, it is not shocking to reasonably civilized people that some within the justice system should be segregated from the rest of the prisoners. To make the bold argument that all solitary confinement amounts to torture is a dangerous precedent. Without this tool at corrections’ disposal, millions of non-violent and compliant offenders could be put at risk. Freedom from exposure to violent, anti-social, and mentally ill inmates is also a human right, one that would be violated if AOC’s ideas were carried to their logical conclusion (a ban on all solitary confinement.)

Chelsea Manning Has Been Charged With No Crime 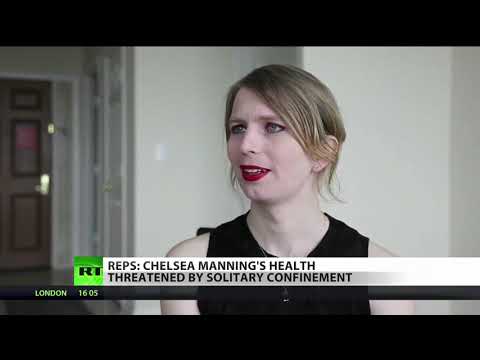 AOC believes that Chelsea Manning is receiving perversely “special” treatment because of her status as a well-known whistleblower. But corrections officials argue that administrative segregation is the norm for high-profile or risky inmates. Child molesters and celebrities are often housed separately from the general population for their protection. Manning’s status as a transgender person would likely do her no favors in the general population.

Whether or not Manning should even be in jail is the real question. Some form of house arrest would seem more appropriate for someone whose only “crime” is refusing to comply with a Grand Jury’s inquiries. Technically, she hasn’t been charged with a crime. So the absurdity of the situation is amplified by her celebrity status and the nature of her confinement. If jail officials believe that she is at risk within the general population, then she should be released, rather than held in administrative segregation, since she is not even technically charged with a crime.

Manning will stay in jail until she complies with the request for testimony or the Grand Jury concludes its business. She is not eligible for bail because, again, she has not been charged with a crime. AOC might be right that Manning is being unfairly treated, but that doesn’t make solitary confinement a torture device.