This time, it’s courtesy of her former “Suits” co-star and minor actor Patrick J. Adams, who claims — years after the fact — that he was so afraid of the Duchess of Sussex that he couldn’t bear to approach her today.

It feels, once again, like a coordinated attack on Markle to distract from some real issues.

What’s Patrick J. Adams Have To Say About Meghan Markle After All These Years?

Patrick J. Adams is a Canadian actor who’s best known for who he married — “Pretty Little Liars” star Troian Bellisario — than for what he’s done as an actor. “Suits” is, unfortunately, his best-known role, though these days it looks like he’s working the publicity rounds for his role as John Glenn in the new Amazon show “The Right Stuff.”

But having nothing else to talk about — like, say, the series he’ll be starring in — he decided to bring up ancient history as the love interest of Meghan Markle on “Suits.”

And this role as her “love interest” apparently scared the bejesus out of him, to the point that he’s still talking about it to this day.

I have no doubt I could pick up the phone and call her at any moment, but I don’t know what I would say. After our children were born, there were some texts sent and gifts sent, but I guess I’m a little scared. I think it’s pure fear. I guess I’m scared about the idea of breaking through whatever walls exist to have that conversation.

Wow, Meghan Markle sent gifts and texts when his daughter was born. She sounds just dreadful, doesn’t she? What a wicked, black widow spider of a woman — no wonder he’s so afraid of her.

Funny, though: he was singing a different tune two years ago, as you can see in the video below. 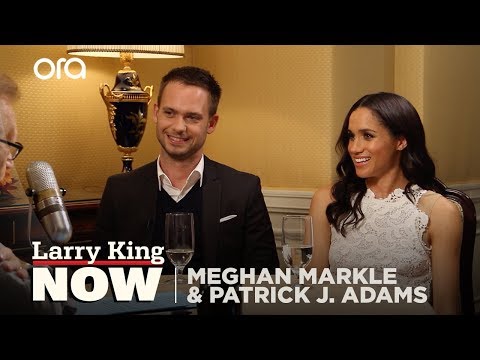 By now, the pattern is clear: every time Prince Andrew — and his disgusting behavior — comes up, it’s time to throw Meghan Markle under the bus to distract from it all.

This time, the whole “the Duchess is so scary!” public relations blitz is here to hide the fact that the disgraced Duke of York dropped more than $20,000 to attend a golf tournament. I suppose the same monarchists who clutch their pearls at Meghan Markle and Prince Harry’s spending have nothing to say regarding a royal with irrefutable ties to a sex offender named Jeffrey Epstein.

This same report disclosed that the Duke and Duchess of Sussex not only paid a lump sum in rent for the use of Frogmore Cottage, but they paid back every dime spent on the renovations. How about Prince Andrew, though? Has he opened up his checkbook to reimburse the crown for golf outings? Perhaps gotten a job and paid his own way like his nephew is doing? Nah, probably not.

These attacks on Meghan Markle are getting tired and desperate. And they’re certainly not going to make the allegations against Prince Andrew go away.