Okay, Green New Deal supporters. You’re on notice that this widely-pitched effort has a predecessor that preyed on people who fell for a bogus company that touted clean energy solutions. Its sinister founders even managed to hoodwink former President Bill Clinton.

As the proposal, inspired by freshman Rep. Alexandria Ocasio-Cortez, gains supporters, it may also attract bad actors. Such was the case with Amanda Knorr, who co-founded Mantria, a supposed green energy company that turned out to be a Ponzi scheme.

For her role in running it, Knorr was sentenced last Friday to two and a half years in prison. She’d pleaded guilty to wire and securities fraud. 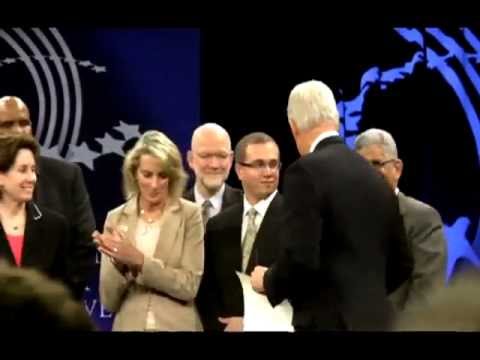 In what’s being called the biggest scam involving clean energy in American history, Knorr and her two cohorts milked 300 investors out of an estimated $54 million.

Knorr and her boyfriend/co-defendant Troy Wragg formed Mantria Corp. Not only did they date, but they concocted a grand scheme to lure environmentally-conscious investors. These profit-driven tree huggers thought they were investing in a startup that was as concerned about the environment as they were. They were swayed by the company’s claims that it sold real estate and green energy products.

One such product was biochar, for which former President Bill Clinton honored the company and co-founder Troy Wragg at a Clinton Global Initiative event (video above). Shockingly, prosecutors found that Mantria never even produced this form of charcoal that’s produced by plant matter.

The couple also hooked up with Wayde McKelvy who recruited investors for the Mantria Ponzi scheme through his “Speed of Wealth” seminars. He allegedly told attendees to liquidate their assets – even their retirement accounts – and put the money into Mantria.

According to the indictment from the Justice Department, the gang promised shareholders huge returns for investments in supposedly profitable business ventures in real estate and “green energy.”

“Instead of high returns, the over 300 victims of this fraud unwittingly invested in uninhabitable land and a bogus trash-to-green energy business idea based on bogus scientific methodology.”

In addition to the 30-month sentence, Knorr was ordered to pay $54 million in restitution. She’ll also be on parole for five years after she is released.

Given the extent of their crimes, Knorr’s sentence is receiving criticism.

ZeroHedge pointed out that merely $17 million of the $54 million believed to have been invested in Mantria has been returned to investors. By the time the company was shuttered by the U.S. Securities and Exchange Commission in 2009, Mantria had just $790,000 of the remaining $37 million.