When the US and China unveiled the “phase one” trade deal last Friday, the Dow Jones Industrial Average responded by rallying aggressively – only to careen back into ho-hum territory amid mounting questions about what exactly the agreement entails.

Not much changed on that front over the weekend, but the Dow nevertheless achieved a triple-digit rally on Monday, broaching a new all-time high in the process.

Here are five factors behind the stock market’s record-setting day.

1. A vital US manufacturing indicator suggests that this weak sector is expanding.

There’s no question that the trade war has battered US manufacturing. Relief from tariffs should ease pressures on this floundering sector, and the latest data release from IHS Markit suggests it remains on solid footing.

Though slightly below last month’s revised reading of 52.6, it marks the index’s fourth-straight month of expansion following an unexpected contraction in August.

Commenting on the flash PMI data, Chris Williamson, Chief Business Economist at IHS Markit, said that the US economy appears to be regaining “growth momentum” as it prepares to enter a new decade:

The surveys bring welcome signs of the economy continuing to regain growth momentum as 2019 draws to a close, with the outlook also brightening to fuel hopes of a strong start to 2020. Business activity, order book and jobs growth all accelerated to five-month highs in December, buoyed by rising domestic sales and further signs of renewed life in export orders.

The data helped Caterpillar, a Dow Jones component viewed as a bellwether for global manufacturing, rally alongside the bulk of its fellow DJIA members on Monday.

Adding to the economy’s brightening outlook, homebuilder confidence unexpectedly surged to a 20-year high in December, recording its highest reading (76) since June 1999.

Economists had actually expected homebuilder sentiment to sour. The consensus estimate was a reading of 70, down from November’s revised figure of 71.

Concerns about a housing market bubble have grown throughout the year. Home prices are rising far more quickly than wages, and the gap between asset valuations and household incomes has never been this large.

Nevertheless, today’s data release suggests that if there is a recession coming, homebuilders aren’t concerned about it setting in anytime soon.

3. Stock market analysts are predicting a “risk asset melt-up” to kick off the new decade.

Bloomberg reports that Bank of America strategists anticipate a “risk asset melt-up” in the first quarter of 2020, with gains in the Dow and S&P 500 fueled by de-escalation in geopolitical risks like the trade war and Brexit.

“We continue to expect returns to be front-loaded in 2020,” the investment bank strategists wrote.

The bull run may not continue throughout the year, but investors should expect to see stocks rally around 5% by the beginning of March. The pivot to risk assets should also help Treasury yields rally.

Of course, none of this would matter much if bearish warnings that the US-China trade deal wouldn’t survive the weekend had been vindicated. Luckily for investors, that didn’t happen. 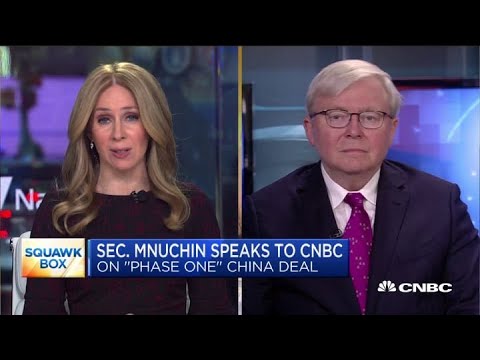 While we still don’t know much more about the “phase one” agreement’s details than we did on Friday, nothing has emerged to suggest that the trade war truce won’t hold for the foreseeable future.

5. Trump’s top economic adviser says the agreement will cause US exports to China to double.

Further teasing the appetites of Dow Jones bulls, Larry Kudlow, Trump’s top economic adviser, predicted that the trade deal would be a massive boon to US companies.

Speaking with Fox News, Kudlow – the National Economic Council Director – said that US exports to China would double under the terms of the agreement.

“They’re … going to double our exports to China,” he claimed.

That said, Chinese government advisers have warned Beijing that China faces a “huge challenge” if it truly intends to ramp up its purchases of US goods to the degree that the White House claims.