Until three weeks ago, it seemed all but certain that basketball fans across the globe had already watched the final game pitting LeBron James against Carmelo Anthony. But the Portland Trail Blazers made sure the future Hall-of-Famers would get another chance to go toe-to-toe, ending Anthony’s year-long NBA hiatus last month.

In anticipation of their 39th professional matchup when the Los Angeles Lakers visit the Blazers on Friday night, here are the five most storied games of the nearly two-decade rivalry between James and Anthony.

Two legends, still at it. pic.twitter.com/1lT0mohdC4

The latter would lead Syracuse to the national title one year later, staking his claim as perhaps the best freshman in NCAA history.

The former was merely a high-school junior when he was anointed “The Chosen One” on the cover of Sports Illustrated, prompting a media frenzy never before generated by a high-school athlete.

Anthony’s Oak Hill Academy, the top-ranked prep team in the country, got the victory against James and upstart St. Vincent-St. Mary’s, with the stars combining for 70 points.

It’s almost impossible to describe the hype surrounding James and Anthony’s first meeting as pros on Nov. 5, 2003. The pair had more than lived up to the historical stardom portended by their initial nationally-televised matchup as high schoolers, with James being selected first overall in the 2003 NBA draft and Anthony following him at third.

But with the entire sports world watching and Jay-Z sitting courtside, they didn’t make good on comparisons to a new-age Magic Johnson and Larry Bird. Neither player won the battle, with both struggling from the field, but Anthony won the war again, as the Denver Nuggets beat James’ Cleveland Cavaliers 93-89. 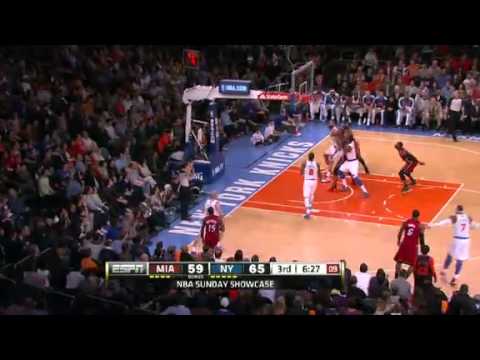 Just more than a year after they first met in the playoffs, LeBron James and Carmelo Anthony were the talk of the league again on March 3, 2013.

The defending-champion Miami Heat entered Madison Square Garden riding a 13-game winning streak. But the New York Knicks were just as big a story, coming out of nowhere for their best season since the late 1990s as Anthony made his case to join James at the top of the MVP race.

The Knicks got off to a roaring start, taking a 14-point lead into halftime, but the Heat stormed back after intermission to win 99-93, extending a winning streak that ultimately reached 27 games – the second-longest in league history. James scored 20 of his 29 points in the second half, while Anthony dropped a game-high 32 points. 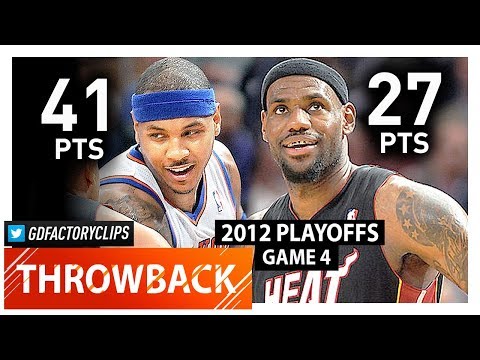 No team has in NBA annals has ever come back from a 3-0 deficit to win a playoff series. Anthony clearly didn’t receive the memo before tipoff on May 6, 2012, putting together one of the best postseason performances of his career with New York’s back against the wall.

Anthony dropped 41 points to help the Knicks stave off elimination for one more game, beating the Heat 89-87. James gave Miami a chance late by scoring six points in 50 seconds, but his game-long struggles proved too much for the Heat to overcome.

James owns a 19-14 record against Anthony in the regular season, and Miami easily dispatched New York in five games during their only meeting in the playoffs. His individual numbers in their rivalry are objectively superior, too.

But only one of James and Anthony has ever hit a game-winner in their 38 matchups. Anthony’s jumper over the outstretched arms of James on February 18, 2010, gave the Nuggets a 118-116 lead with less than two seconds remaining, capping a 41-point night – and giving him bragging rights he’ll hold onto forever.