Twitter limits posts to 280 characters, but Donald Trump only needed 72 of them to spark a 365-point Dow Jones Industrial Average rally on Thursday.

Five minutes after the stock market opened to slight losses, the president unleashed a tweet brimming with so much optimism about the US-China trade deal that caps lock could barely contain it.

Trump Tweet Lifts Dow by 22 Points for Every Word

On the surface, the tweet said very little. And it said nothing that investors haven’t heard Trump say before. But coming now, as Trump prepares to meet with his trade team today to gameplan Sunday’s tariff deadline, that tweet said everything that stock market bulls wanted to hear.

Just like that, a quiet day for US stocks transformed into a spectacular rally, and less than an hour later, the Dow Jones was basking in the glow of a new all-time high.

The Dow quickly pared those gains heading into the afternoon session, but it’s still remarkable how abruptly Trump’s tweet moved the market.

At last check, the Dow was up 70.77 points or 0.25% at 27,982.07. That suggests that investors remain bullish about the short-term outlook for US-China relations, though perhaps less so than they were this morning.

Amazingly, there appears to be an outside chance that Washington and Beijing strike a limited trade agreement before the Dec. 15 deadline, which is now just three days away. That’s largely because the US may be willing to deliver China a key concession in return for ironclad commitments on agricultural purchases. 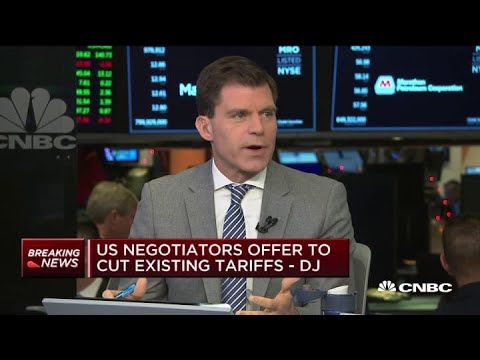 According to the Wall Street Journal, White House trade negotiators have offered to compromise on China’s demand for tariff rollbacks. Despite maintaining a hardline stance in the press, the US has reportedly told Beijing it’s willing to include a trade deal provision that reduces existing tariffs by up to 50% on around $360 billion worth of Chinese products.

Regardless, Trump’s tweet has all but dashed fears that he will carry out Sunday’s tariff hikes. Barring an unexpected twist in today’s trade war narrative, the stock market should be on track to close the week in positive territory.